Worth A Listen: Top Audio Tracks for March 2014 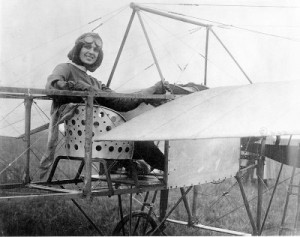 Nate DiMeo provides a really compelling mini-portrait of Quimby, the first American woman to obtain an airplane pilot’s license. As ever, he takes historical people and events that have faded from popular view and imbues their stories with depth, character and adventure.

Message in A Bottle/Re:Sound #185 – The Chance Encounters Show

The first feature in this hour-long show will beguile the most jaded listener. Irish producers Peter Mulryan and Liam O’Brian tell the tale of American serviceman Frank Heyostek, who tossed a message in a bottle into the Atlantic Ocean on Christmas Day 1945. Eight months later, it was found by a young woman on a beach in Ireland. The producers use interviews with relatives of the two principal characters, letters, and news clippings (their relationship generated international news!) to tell a story of love found … and lost.

Sound Tourism is the brainchild of Trevor Cox, professor of Acoustic Engineering at the University of Salford. The site has inspired a popular science book. At the heart of the site is a global sound map, which features information on intriguing soundscapes from around the world. Most continents are represented on the map, which has tags for sites that include “worth a detour,” “worth a journey,” and “interesting.” The site is a refreshing approach to encouraging tourism based on the ear, rather than on the eye. Many of the tagged locations on the site have their own sub-page, which includes details on what sounds can be heard there, how to get there, and a video with a sample of the soundscape.

Both audiophiles and science buffs will love these links, provided free of copyright restrictions by NASA. Here, you’ll find links to a bevy of cool audio, including NASA recordings from historic spaceflights and current missions (like “Houston, we have a problem,” and “That’s one small step for man, one giant leap for mankind”), the Sun’s auditory signature ( a low hum punctuated by frequent rhythmic, bass-y thumps) or a collection of “spooky” space sounds NASA put together for Halloween.

This huge treasure trove of songs and interviews recorded by the legendary folklorist Alan Lomax from the 1940s into the 1990s, now digitized and made available online for free listening, represent one of the most significant contributions to the preservation of U.S. and world culture ever made by a single human. The Association for Cultural Equity, a nonprofit organization founded by Lomax in the 1980s, has posted some 17,000 recordings.

Lomax was a pioneering oral historian, who recorded substantial interviews with many legendary folk and jazz musicians, including Woody Guthrie, Lead Belly, Muddy Waters, Jelly Roll Morton and other jazz pioneers, and Big Bill Broonzy. He also initiated some of the first (if not the very first) “man-on-the street” radio interviews of ordinary citizens. This archive is an amazing gift to fans of folk music, world culture and the audio imprint of the 20th Century!

Sign up for the Listen Closely Productions email list at http://eepurl.com/bXp2db for tips and offers to help you learn how to create your own personal or family history projects!